My Experience at the European Youth Parliament

My experience at the European Youth Parliament by Muireann Emerson

The Dublin regional session of the European Youth Parliament this year was from the 21st to the 23rd of October.  I attended with six other people from Loreto on the Green. At first, I was anxious about the weekend.  I wasn’t sure what the session would hold and if I would mix well with the other young people there. However the three days ended up being one of the best experiences I could have.

Upon arrival, we had time to talk to other delegates and get to know each other. The first day, Friday was about mixing and getting settled into the event.  We were introduced to the amazing team, including the President’s Board, head organisers, Jury team, Media team and safe people.  We got to play some icebreakers and games, and before long everyone was laughing and having fun together. Next we were introduced to our committees. There were ten in total, each one dealing with a different topic relating to current affairs. I was in IMCO (Internal Market and Consumer Protection), which was dealing with inflation rates and the factors influencing them, such as the War in Ukraine and the demand to meet the Green Transition Goal. Our aim was to find a way to maintain adequate and affordable pricing, while also acknowledging the EU’s Green Transition. The first day was very fun as I got the chance to meet my committee members and chairperson. We played icebreaker games and had small debates in order to get to know each other better, which really helped.

Saturday began with an opening ceremony to the event, and then involved coming up with a resolution for our committees; we spent the day listing problems and solutions for our topics. Mixed in with the work were some fun energisers and games which gave us some time to talk to others from different committees. At the end of the day, they held a disco. The theme was “scrabble disco” which meant that we each got a letter and had to spell out words with each other relating to various themes given to us.  After this, we got the chance to sing karaoke which was so much fun! I sang “Breaking Free” from High School Musical with some people from Loreto on the Green and other friends we made. It was a fantastic night.

The final day of the session was a General Assembly. This meant that each committee had the opportunity to show their resolutions and debate with other committees about various points in their resolutions or to give praise to them.  No one had to speak at the event but almost everyone in the room got up at least once to make a point or speech. It was nerve wracking at first to get up and speak in front of everyone but after a while it was fun to make a point in a debate or give a proposition speech. The day wasn’t too serious either, in order to be recognised by the Jury some committee members put stickers on their placards and did dances!  Although not every resolution was passed, each committee gave excellent points and clearly had a lot of fun in the Assembly. The Dublin session then ended with a closing ceremony with many very emotional thank you speeches.  At the very end, everyone sang “Imagine” by John Lennon together before leaving.

My first experience at EYP was one I will never forget. It gave me the opportunity not only to debate and learn about various topics at the European Parliament but also to have a lot of fun! I made so many friends and talked to people I never would have talked to before.  It was personally a very special weekend and one that I will remember for a while! 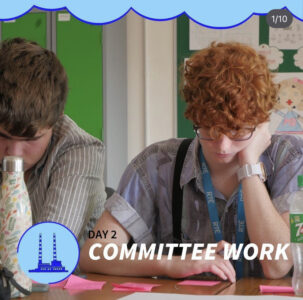 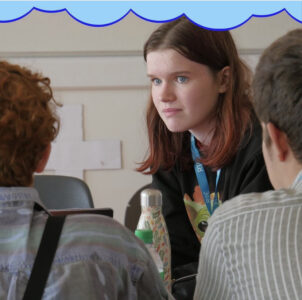